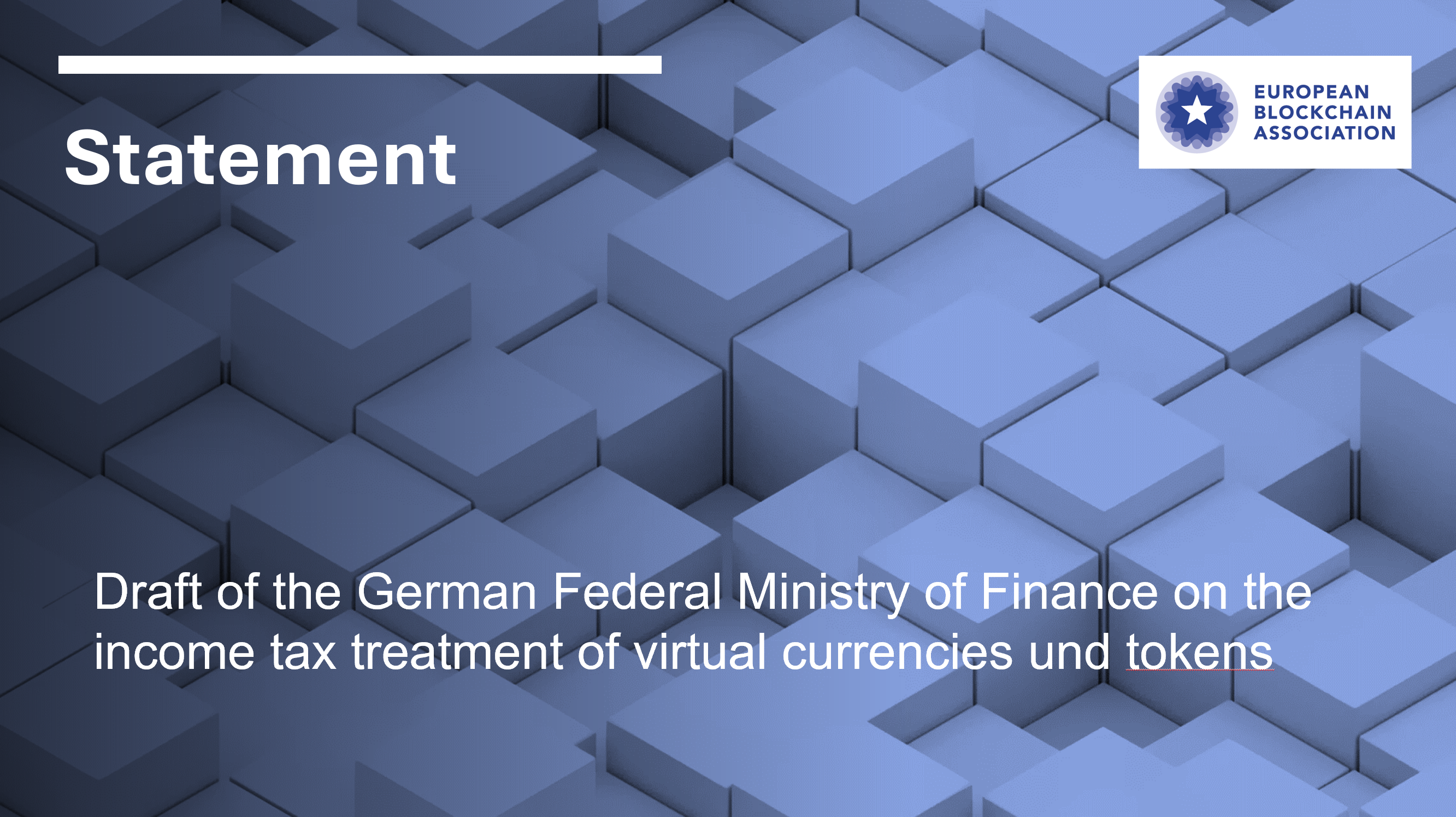 Statement on proposed tax treatment of virtual assets in Germany

In June 2021, the German Federal Ministry of Finance (BMF) issued a draft decree on income tax treatment of virtual currencies and tokens. While the blockchain industry in Germany has been waiting for a clear regulatory framework for years and the EBA absolutely welcomes the initiative, the now proposed tax treatments raised serious concerns, especially among the members of our Proof-of-Stake Working Group (EUPoS).

We took the opportunity provided by the BMF to communicate our point of view in an official statement. Here is an English translation of the working group’s response.

If you are interested in shaping the future of the staking industry, we invite you to join our working group here https://europeanblockchainassociation.org/eupos/

The original German version of this statement can be found here.

The European Blockchain Association (EBA) supports the BMF’s plan to create clarity for the taxation of virtual currencies and tokens. In the EBA’s view, sensible and sustainable taxation is an important component of a sustainable and functioning blockchain strategy. However, in the EBA’s view, the proposed tax assessment, especially of staking, fundamentally contradicts the German government’s blockchain strategy and directly jeopardises the attractiveness of Germany as a blockchain market. The extension of the holding period to ten years for virtual currencies participating in the staking process also indirectly jeopardises the security of the networks. The Proof-of-Stake Working Group of the EBA states its position on this as follows:

As the BMF correctly recognised in its letter, staking is an essential component of the consensus mechanism, i.e. the underlying technology for proof-of-stake (PoS) blockchains and the developments based on them. Virtual currencies that participate in the staking process fulfil a task that is essential for the security of the networks, namely securing the current state of the network cryptoeconomically/game theoretically. The larger the percentage of the virtual currencies active in the staking process, the more reliable and secure the current state of the blockchain. Thus, if 50% fewer people are incentivized lured into staking in a network due to poor incentives, this directly means that a potential attack on a network has become cheaper by half. High participation should therefore be incentivised in order to protect the public infrastructure and also the developments based on the technology.

According to the German government’s blockchain strategy, resource-saving blockchain networks are to be promoted, the proposed tax assessment of stacking would contradict this statement. The extension of the holding period therefore not only jeopardises the security of the networks but also the attractiveness of the proof-of-stake networks, which are many times less energy-intensive than proof-of-work.*

The free holding of tokens (unstaked) and thus speculation on rising prices is additionally incentivised by the BMF’s proposal, because under the proposal the speculation period remains in place. The extension of the holding period, as well as the tax burden arising from staking, make the relatively low returns in the form of staking rewards unattractive. From the EBA’s point of view, the desire for taxation of the income from staking is understandable in principle, but taxation must not have any effect on the deposited stake in order not to jeopardise the attractiveness of staking and thus the security of the networks. The extension of the holding period to ten years in the context of the current rapid development cycles is a disproportionately long period burde in the rapidly evolving blockchain sector.

The BMF’s proposed interpretation of the current legislation furthermore endangers investors, as well as companies and developers who develop on the basic infrastructure of PoS blockchains. Under this proposal the basic infrastructure of the networks would potentially not be sufficiently protected. From the EBA’s point of view, the BMF must clearly define the technical relevance of staking and the distinction from classic financial revenue sources such as “lending” and “borrowing”, as well as also treating them differently from a tax perspective. However, a purely tax-based view cannot suffice due to the technical relevance of the processes.

The BMF assesses income from staking as a specific type of income generation through the use of private economic assets (Einkunftserzielung durch die Nutzung privater Wirtschaftsgüter). In contrast to the container leasing models, for example, which is the standard case they compare staking to, the purpose of staking is to ensure network security.** For this, the participants receive a service in return, without which the necessary service of securing the network game theoretically would not be accomplished. The rationale of extending the speculation period to ten years therefore does not fit and it is highly questionable whether the BMF’s decision would stand up to judicial review.

In short, a tenfold increase in the speculation period will make staking unattractive for participants, as they will be deprived of the opportunity to sell crypto assets tax-free after one year. As a result of a reduced number of participants engaging in staking, the security of the blockchain networks decreases. The goals set by the federal government and the Bundestag to establish blockchain technology in Germany, especially in the financial sector (crypto assets, crypto securities), cannot be achieved with this.

4 Potential Effects on Germany as a Business Location

With its blockchain strategy and the Digital Securities Act, the German government has taken an important step towards promoting Germany as a blockchain marketplace. As described above, the interpretations of the BMF directly jeopardise these goals, as the provision of infrastructure security is endangered by the tax interpretation. From the EBA’s perspective, a detailed, innovative and, above all, enforceable tax strategy must be an essential component of an innovative blockchain industry in Germany. The current draft does not meet this requirement. On the contrary, it creates economic disadvantages for investors as well as companies and developers in the industry.

From the EBA’s point of view, the proposed tax assessment of virtual currencies by the Federal Ministry of Finance is a clear step backwards in this strategy and will potentially cause considerable damage to Germany as a competitive location for companies with blockchain-based operations.

A number of technical terms used by the BMF, such as “cold staking”, are terms that are not established in the industry. Furthermore, common distinctions between PoS, delegate Proof of Stake (dPoS), master nodes, and validators are not further explained.

Furthermore, documentation requirements for investors are partly not described at all or are otherwise associated with disproportionate effort on the part of participants in the staking process. Moreover, on the enforcement side, a review of the documentation by the tax authorities seems to be almost an impossible task and one which is completely out of proportion to the tax revenues which could be collected from stakers.

The EBA would like to speak out once again in favour of a sensible and sustainable taxation of crypto assets. From the EBA’s point of view, the Federal Ministry of Finance should provide a tax incentive for participation in the staking process, since participation in staking both promotes the security of the networks and represents an energy-saving alternative to the proof of work concept (mining).

** Translators note: The english text has been modified for clarification here. Container leasing model which were a popular form of tax avoidance up until 2008 when the corporate tax reform law was introduced. This law was intended to clamp down on income generated from rental activities related to containers and specifically from the tax-free sales of containers became attractive investments. In stark contrast to staking there was no substantial value added in the container case as it was primarily a form of tax avoidance.