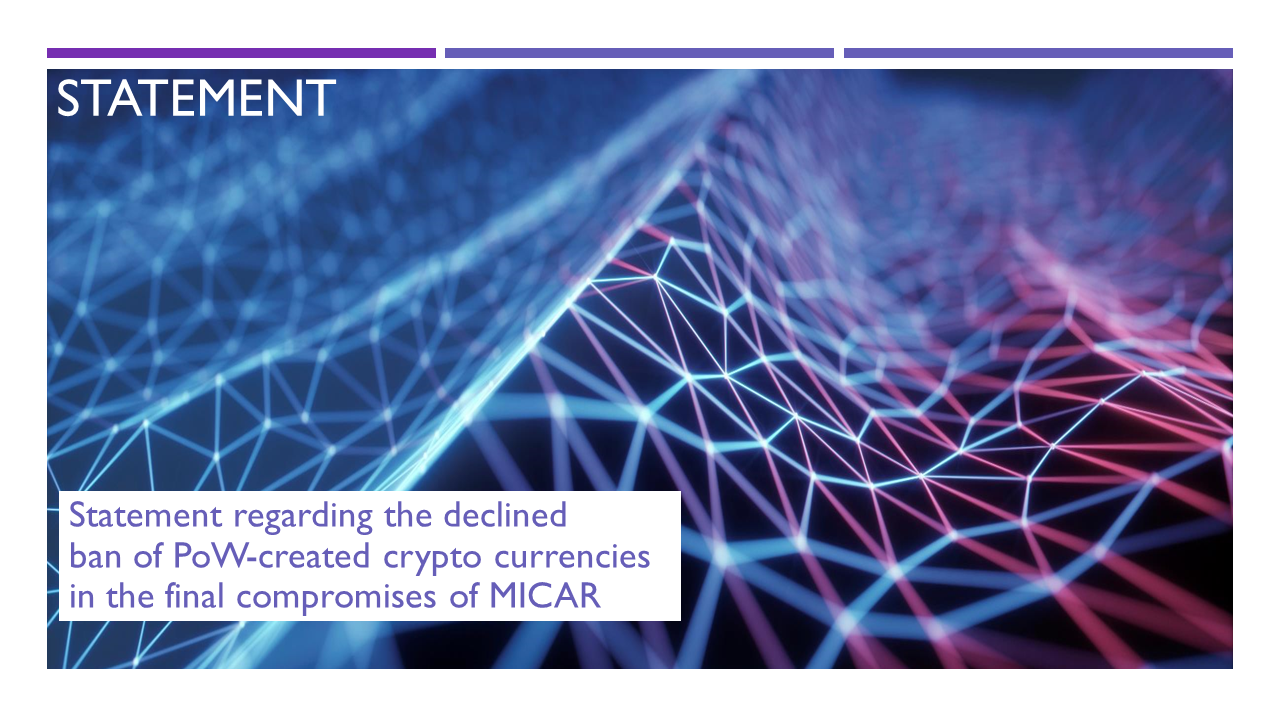 MiCAR has long been a bone of contention between the EU Commission, Parliament and the market. Many ambiguities in its important definitions led to MiCAR procedure to take extremely long. Also, the final compromise has been changed many times during the trilogue proceeding. In the end, however, a compromise appeared to have been reached. Our member Tanja Aschenbeck, Head of Financial Services at Osborne Clarke Germany, and Michael Gebert, Chairman of the European Blockchain Association, share their thoughts on the concerns that led to the discussions and more appropriate solutions to address these concerns.

A final vote in the ECON Committee was scheduled for 28 February 2022, but the majority that MEP Stefan Berger thought was secure, had dissolved. Background was that the final compromise provided for a ban of crypto assetst based on the Proof of Work (“PoW”) concensus mechanismn from 2025. This ban had been pushed by representatives of the Social Democratic Party of Germany, the Alliance 90/The Greens and the Left. They wanted to prevent significant adverse environmental impacts and support the achievement of the climate objectives under the Paris Agreement. Certainly, with PoW, mining is time-consuming and cost-intensive. For example, the operation of the Bitcoin blockchain consumes more electricity per year than the entire country of Lebanon. According to experts, electricity consumption is 130 terawatt hours per year, which is about 0.08% of global energy consumption.

The main argument in favour of the ban was that PoW is energy-intensive and therefore considered a rather environmentally damaging process to produce crypto assets. Due to the energy transition, there are generally already gaps in the power supply of European countries, that should be closed, or at least reduced. Further, the hardware of mining pools must be replaced every one to two years, which probably results in 30,000 to 65,000 tonnes of electronic waste per year. There are also more modern, less energy-intensive consensus mechanisms available that are less harmful to the environment than PoW. Finally, there are already other countries like China, Tunisia, Egypt, Algeria or Iraq that have banned PoW. Thus, the EU would not have been alone.

But is a ban of all PoW-created crypto currencies really the right answer to the concerns? We don’t think so.

A ban of PoW-created crypto currencies: arguments against it

One argument against a ban is that it were detrimental for the technology and would probably result in a migration abroad This in turn could significantly damage the European crypto and FinTech market. A ban could put the EU itself at a severe disadvantage in competition with other markets and lose geopolitical access to Bitcoin. This is likely to be highly problematic, with Bitcoin alone dominating the market by around 40%.

Moreover, there is already an awareness of the problem in the market: half of the miners already use renewable energies and FinTechs create initiatives to offset CO2 emissions.

Further, the draft wording for the ban had several blurs: It was, for example, unclear what exactly “operated on a large scale” should mean – this was part of the definition for an ‘environmentally unsustainable consensus mechanism’, being defined as a “[…] mechanism whose operation give rise to significant adverse environmental impacts on a large scale and which undermine the achievement of the climate targets of the Paris Agreement”. This unclear definition had been criticised by experts and the market throughout the MiCAR process. Unclear definitions make it difficult to determine the scope of regulation and therefore undermine MiCAR’s goal of creating a harmonised regulation for crypto assets in the European Union.

We believe that there are certainly more appropriate measures for the European legislator than the initially planned far-reaching ban to make the crypto industry more sustainable: For example, an obligation to register and report energy consumption for miners, as successfully introduced by Iran, could be an equally effective but less intrusive solution. An obligation to offset CO2 by investing in sustainable projects or buying CO2 certificates is also conceivable. Finally, an obligation to use electricity from renewable sources for the operation of a mining pool could be introduced.

The radical ban could have been one of the reasons why some countries, including Austria, are said to have lobbied intensively against the PoW ban. This eventually led to the postponement of the final vote and a further revision of the final compromise.

Therefore, it looks like trading with Bitcoin and Co will still be allowed after 2025 – at least for the time being.